The Longer a Conflict Stews…

The latest findings from Howard Markman, professor of psychology University of Denver, published in June in the “Journal of Family Psychology,” show that couples who reported they had negative communication before marriage—criticizing each other’s opinions, rolling their eyes, leaving the room—were more likely to end up divorcing. Although research shows that the biggest issues couples argue about are money, sex, work, kids and housework, we all know the possibilities for conflict are endless. It may be helpful to note that the experts make no distinction between arguing, fighting, bickering or even nagging (I was horrified to learn). They’re all ways of expressing disagreement with another person that often become destructive, with one or both people using insults, clamming up or storming off. Why do we do this? For starters, many of us learned by watching our parents have destructive arguments—or bottle up their anger and give each other the silent treatment. We’ve also been raised to believe that success means winning—and if one side wins, the other must lose. Now, here’s the good news: It’s possible to learn to argue in a much healthier way. The first thing you have to do is talk to the other person. “The longer a conflict stews, the more likely we are going to get into catastrophe mode,” says Jennifer Samp, associate professor in the speech communication department at the University of Georgia and a fellow at the Institute for Behavioral Research. “We are mulling it and thinking about it and it will become bigger and scarier and more threatening than if we are able to talk about it if it just comes up,” she says. Dr. Markman has developed a method, for helping couples settle disputes, called the “speaker-listener technique,” which he details in a newly revised edition of a book he wrote with several colleagues: “Fighting for Your Marriage.” He says that couples who have a disagreement should call a “couple’s meeting” to discuss the issue without looking for a solution—and set a time limit of 15 minutes. They may flip a coin to see who speaks first. The person who wins the toss, let’s say it’s the wife, should explain her position in two to three statements. Her husband should listen, then repeat what he heard, to show that he understood. The wife should then speak again, further explaining her position. And, again, the husband should listen and repeat her points. They then reverse roles and repeat those same steps. .”A lot of times, all you need is to be listened to,” says Dr. Markman, who tells couples that by the end of this exercise, it’s likely that an answer to their problem will be evident. By Wall Street Journal columnist Elizabeth Bernstein http://online.wsj.com/article/SB10001424052748703700904575391013484475040.html

Very often in everyday life
one sees that by losing
one’s temper with someone
who has already lost his,
one does not gain anything
but only sets out upon
the path of stupidity.
Hazrat Inayat Khan 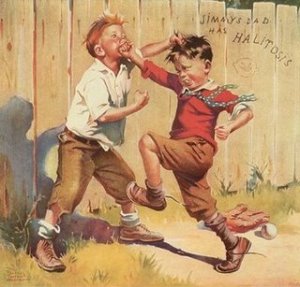 Stand on any school playground and watch what happens around you. You’ll see groups of children playing, some children wandering by themselves, and occasionally, children arguing and fighting. And depending on whether those children are girls or boys, you will notice differences in how they express their anger. The boys may argue, have fistfights, or throw things at each other. The girls usually sulk, pout, or spread gossip. Anger has long been an acceptable emotion in boys and men. After all, the reasoning goes, they have lots of testosterone; they can’t help being aggressive. Indeed, anger, including fistfights or other physical confrontations, is often seen as true masculine behavior. Even in these supposedly enlightened times, someone who walks away from a fight may be called a coward. Numerous studies have shown that there is no real difference in the way men and women experience anger. All people feel anger, and most feel angry about the same things. However, men and women (and boys and girls) express their anger in different ways. Men tend to be more physically aggressive, to engage in passive-aggressive behavior more often, and to be more impulsive in expressing anger. Women stay angry longer, are more resentful, and often use relationships as weapons in expressing anger (such as excluding a former friend, starting unpleasant rumors, or insulting someone’s appearance). Some experts believe that boys are prone to anger because it is an emotional substitute for other, less acceptable emotions, such as sadness or loneliness. Parents, too, contribute to boys’ anger; research has shown that parents encourage daughters to resolve conflicts peacefully but allow boys to retaliate. Anger is a normal part of the human emotional spectrum; in fact, anger is often what motivates us to solve problems, to stand up for ourselves, and to attempt to right the wrongs of the world. Misdirected anger, however, can cause great harm. http://life.familyeducation.com/boys/emotions/55298.html

It is wise to direct
your anger towards
problems, not people,
to focus your energies
on answers, not excuses.
William Arthur Ward