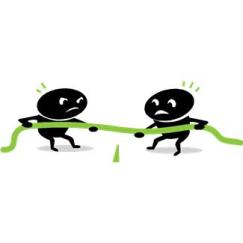 A healthy functional human relationship is one that is based on exchanging value for value with another person. Think of your close male friends. You respect and admire their character based on their virtues. You derive satisfaction from spending time with them in response to the values they hold in common with you. In contrast the average modern relationship a man has with a woman is one that is very twisted and corrupt when observed from a rational standard. “The man who attempts to live for others is a dependent. He is a parasite in motive and makes parasites of those he serves. The relationship produces nothing but mutual corruption… …the man who enslaves himself voluntarily in the name of love is the basest of creatures. He degrades the dignity of man and he degrades the conception of love.” -Howard Roark “The Fountainhead” Frequently we discuss the idea that women are parasitic by nature and very often in practice in our modern society. What is rarely discussed is how the majority of men in marriages and relationships are also parasites but in a different way. Hence forth in this post I will refer to these men as Coppertops because they serve as the store of energy and resources that women and society feed off of. The coppertop spends his entire life in pursuit of this one addiction he values more than anything, even sex. He gets it wherever he can, from friends, family and society but most often in a romantic relationship with a woman. This visceral need is exactly what turns him into the slave of the spirit that Roark discusses. Once he has it he will go to any lengths to keep it coming. He will offer up his complete subservience and enter into a marriage even when he knows it to be rationally against his interests. Once he has become her slave he will tolerate nearly any abuse and hardship in the name of his love for her, but in reality it is done out of his desperate need for her validation. In order to feel himself a “real man” he has to feel needed by someone. He has to feel useful and will gladly be a utility for her while at the same time she is in fact useless and feeds off his hard-earned resources, offering little to nothing in return. Only her non-existent “love” which he accepts in the form of him being validated as a useful being. Once the female parasite has finished feeding off her host and gives in to her natural hypergamous needs, she will dump him and move on to the “bigger better deal”. To the hardcore coppertop, this event will utterly destroy him. It will annihilate his spirit. The one thing he needed from her more than anything has been completely revoked and rejected. http://www.mgtowforums.com/forums/gyow-general-discussion/19758-male-dependence-women-leads-mutual-corruption-parasitism.html

Life is like a game of poker,
you are dealt a hand,
and only you decide
what to keep
and what to throw away…
Unknown