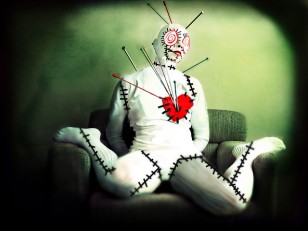 Obsessiveness is common in many ways – not being able to sleep at night because of hurting someone you love, for example, or developing a childhood fascination with dinosaurs that never leaves and you eventually become a paleontologist. Then there is an addiction to obsessiveness which stifles creativity. Obsessiveness is not only boring, it also lacks any faith in process. Process is always out of your control. You must be open to finding out what will happen instead of seeking a false sense of control. An example of this false sense of control would be to think: If I always know where you are, you can’t have an affair. Part of the control of obsessiveness is to nurse hurt feelings, exaggerate disappointment, and constantly blame the other for not coming to the rescue. Obsessiveness is very interesting because there are two sides to it: the positive side is creative passion that helps you know what really matters; the negative side is an addiction which makes you unable to prioritize anything. As a result, things have the same weight. Is s/he having an affair? Just how clean can my house be to prove I know what’s what? Are all those towels really folded correctly? Obsessiveness is a focus on what is NOT. Truly focus on the here and now in the moment and the obsession will change itself. Obsession is a substitute for action. Both polarities of obsessiveness are available. What is more mentally healthy, especially as we age, is sorting out what is important and what to let go of. Ultimately letting go is the final lesson of death. One of the many wonderful aspects about raising children is that elegant dance of knowing what’s important combined with the letting go work of adolescence and not knowing. The not knowing leaves room for respecting their choices as different from your own ideas of who they should be. Too many parents stifle and interrupt children’s abilities to make their own mistakes and their own choices. From “Anxiety, Control & Codependency” by Rhoda Mills Sommer, L.C.S.W. http://therapyideas.net/anxiety.htm

Love without
sacrifice
is like theft.
Nassim Nicholas Taleb