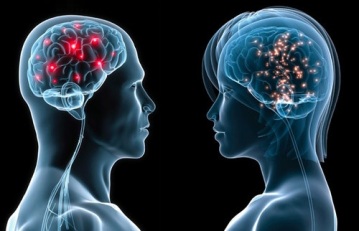 The stereotypes of reserved men and emotional women are widespread and do affect the way young boys and girls are raised. Some researchers argue that we may be ingraining gender differences that do not naturally exist by accepting and passing on these stereotypes to our children. Other researchers believe these differences have developed due to the evolutionary roles placed on men and women to survive and thrive. While researchers debate these gender differences, they agree that the differences ultimately can have a negative effect on members of both sexes. Some research has found that the differences may be rooted in cultural stereotypes. For example, women are perceived as being more emotional and behave that way because it’s believed that’s what women do, while men express emotion only when the situation warrants it. Parents may have a hand in promoting these gender differences, expressing disapproval with boys who cry or express other “weak” emotions while shrugging off similar behavior in girls. Other studies posit an evolutionary cause for these gender differences in emotion. Men serving as hunter-gatherers needed to take more risks and be more dominating, while women who stayed home and cared for young needed to be more nurturing and cautious. These roles have resisted change as human society has progressed, and indeed, progress may cause these roles to become even more pronounced. Gender differences in emotional processing and response have direct consequences on the physical and emotional health of men and women. Overly emotional women tend to be at greater risk for depression, anxiety, and other mood disorders, while men who repress their feelings tend to be at greater risk for physical ailments such as high blood pressure, and also tend to indulge in more risky behavior and vices such as smoking or drinking. Others believe that parents can help dull or negate these stereotypes by refusing to reinforce them. Whether you’re trying to bring up children without gender stereotypes or looking after your own emotional health, be aware of these gender differences and how they affect both men’s and women’s experiences of the world. From an article by Dennis Thompson Jr. http://www.everydayhealth.com/emotional-health/gender-differences-in-emotional-health.aspx