Posted by James Browning on October 20, 2013
Posted in: Anger, Learning From the Past, Self Destructive. Tagged: accepting help, change, rage. 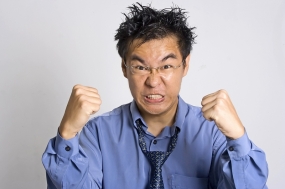 There’s the waitress who refuses to look in your direction. The oaf who drifts across the highway without using his blinker. And the cheerful, recorded voice that draws you deeper and deeper into voice-mail hell. The most minor annoyance can send us into a fury. But have you ever stopped to think why we get angry? What is anger, anyway? “Anger is a natural emotion,” says Charles D. Spielberger, PhD, a research professor of psychology at the University of South Florida who has studied anger for 25 years. “There is nothing abnormal about it.” Anger might be normal, but it does affect you physically. When you get enraged during a traffic jam or at your kid’s soccer game, your hormone levels increase, your breathing quickens, your pulse and blood pressure soar, you start to sweat, and your pupils dilate. Basically, your body is gearing up for action. This is the “fight” part of the “fight or flight” response. Spielberger says anger has an evolutionary advantage: “Fear and rage are common to animals, too, because it helps them to fight and survive.” The problem is that, nowadays, anger isn’t always so useful. Most of us don’t run into man-eating tigers standing in line at the DMV. The physical effects of anger on your body can be lasting. Some studies have shown a connection between anger and high blood pressure, depression, and heart disease. One study found that people highly prone to anger are three times as likely to have a heart attack or fatal coronary heart disease as less angry people. So what’s the solution? Should you cork up your anger or regularly blow your stack? Experts say neither. Whether you hold it in or explode in a rage, frequent feelings of intense anger may pose the same health risks. The key is to make your anger constructive. Spielberger says that the first step is self-awareness. Don’t allow yourself to fly into a rage. Instead, be conscious of your anger. Stay in control. It’s the only way to figure out exactly what is making you angry. Once you can identify the real problem, you can try to solve it rationally instead of getting pointlessly furious. If you’re angry with someone, talk about it in an assertive, but never aggressive, way. If a certain situation sparks your anger, learn how to prepare for it — or better yet, avoid it — in the future. By R. Morgan Griffin http://men.webmd.com/features/what-does-anger-do-to-your-health

Anger is an acid that
can do more harm
to the vessel in which
it is stored than
to anything on
which it is poured.
Mark Twain