Out of Balance Relationship 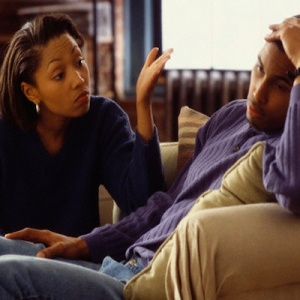 When anyone – a man or a woman — has most of the control in a relationship, they create an out-of-balance, resentment-filled, dysfunctional relationship. Another Denver client I’ll call Burt recently married a woman who continually tells him how unhappy she is and that it is his fault. When I suggested to him that they need to get these issues worked out before he married her, he said he’s talked to other husbands and that this is “normal” in relationships – that husbands have to spend their entire lives trying to make their wives happy. He spends every day trying to change himself to fit who she wants him to be. I said, “Don’t you know that when you do what she wants in one area, there will always be something else she wants you to change?” He said that he did feel that nothing was ever good enough with her, but that maybe he is lacking in a lot of areas. Men went from dominating to weak and they need to come back to the middle and demand equality. I told George and Burt both to stop giving up who they are and stop asking their wives for permission to live their lives. Burt couldn’t fathom it since he’s too recently married to know just how bad it is going to get for him, so he dropped out of therapy. George, who has been married for years and has had time to know this isn’t working for him, agreed. He joined a Monday night softball league and actually had a drink with the guys afterwards. Did he catch hell? Of course! But we prepped for it. He told her, “You’re welcome to come and watch, but I’m not going to stop enjoying my life just because you want me to!” And is he still depressed? Hell no! By Carolyn Bushong http://www.examiner.com/article/weak-men-who-try-to-please

All cruelty
springs
from
weakness.
Seneca