Depression May Be More Deadly for Men 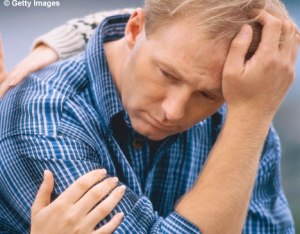 What makes depression in men so dangerous? It too often goes unrecognized and untreated because it is masked by physical complaints, substance abuse, anger and other stealth symptoms.
• Undiagnosed depression is the leading cause of suicide. Men are four times more likely to die by suicide than women.
• Depression is highly associated with cardiovascular disease, heart attack and stroke. Men develop these diseases at a higher rate and earlier age than women.
• Depression is the most common disorder suffered in conjunction with post-traumatic stress disorder (Ursano, Grieger, and Mccarroll, 1996)
• In a recent RAND Corporation study, one in five veterans of Iraq and Afghanistan reported symptoms of combat stress or major depression. In turn, service members with such problems more often report heavy drinking or illicit drug use.
• National Highway Traffic Safety Administration (NHTSA) statistics reveal that the number of boomer-aged men dying behind the wheel rose from 2000 to 2009. Analysis showed men are three times as likely to be intoxicated when getting into a fatal accident as women.
A mix of biological and cultural factors often conspires to keep men and those who love them from recognizing and addressing their depression. By Suzanne Phillips, PsyD http://www.pbs.org/thisemotionallife/blogs/men-and-hidden-danger-depression

One in six people suffer depression
or a chronic anxiety disorder.
These are not the worried well
but those in severe mental pain
with conditions crippling enough
to prevent them living normal lives.
Polly Toynbee