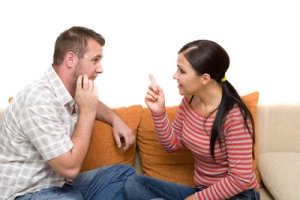 Men have emotions. Women need only adjust how they listen. Men express plenty of feelings; they just do it differently than women and there’s nothing wrong with that. You know how Eskimos supposedly have 4 dozen words for snow? It’s the same thing for women and feelings. They have over 4 dozen ways to describe happy, angry, sad… When a woman says, “men need to be more sensitive and in touch with their emotions,” I hear, “men need to be more like women.” Bad idea. If women want to be with men who can talk about their feelings and daily minutia just like their best girlfriend, then why don’t they just get together with their girlfriend? Men are more solution-focused while women are process-focused. There have been numerous studies (of questionable methodology) asserting that women use more words than men per day. Recent research finds such assertions are unfounded. Men and women actually use about the same number of words a day. It’s not a matter of women being more verbal; generally speaking, we’re equally verbal. Here’s the difference: women use words to process their feelings, often wallowing in emotions without reaching resolution. Men state their feelings and use words to achieve resolution. As a collective, women have told men that not talking about feelings as much as they do makes them inadequate. Dr Tara J. Palmatier, PsyD http://shrink4men.wordpress.com/2009/01/14/men-have-emotions-women-dont-listen/

Love is misunderstood
to be an emotion; actually,
it is a state of awareness,
a way of being in the world,
a way of seeing oneself and others.
David R. Hawkins